9/11 Ceremony And The Forgotten This is a true story. The interview was conducted in New York City on September 10 2014. It is a story that needs to be told, the subject has requested his real name not be used. He is a proud man and he seeks no pity nor does he want anyone to feel sorry for him. He only wishes the story to be told. He is one of hundreds, maybe thousands of the men and women emergency workers who took part in the events of 9/11 in New York City.

Ceremonies were held this year in New York City and Washington D.C. remembering the victims who lost their lives in the horrific terrorist attacks of September 11, 2001. These solemn occasions are a time for prayer and remembrance. A time to once again show ourselves, as a nation that we have endured, carried on, and rebuilt that  which was destroyed that day. Why were the real hero’s locked out in New York? 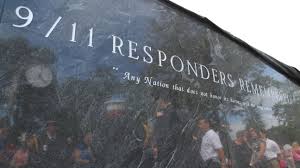 The small, cramped garden apartment on Staten Island is littered with oxygen bottles waiting to be picked up by a medical supply company, they’ll be replaced by new ones. Each new month the number of replacements increases. The apartments owner physical condition is growing increasingly worse, he knows it, the resignation in his voice betrays his otherwise carefree attitude.  Entering the living room the sight is overwhelming. Lined up like little tin soldiers on a game board are  tens of orange medication bottles. Each alphabetically categorized, taped with white, yellow, and green time reminders. They fill every inch of available table space. It’s difficult to find a place to sit amid the medical equipment.

“These are my friends,” John Turco a former New York City Emergency Medical Technician tells his visitor, “They keep me company. On a good day they help me get about as comfortable as the doc can make me at this point.”  Turco, 52 worked as an Emergency Medical Technician as a member of the New York City Fire Department for 16 years when the attacks took place. His station house was one of the closest to the World Trade Center. e was one of the first EMT’s to reach the scene that day. 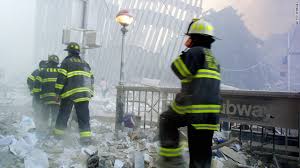 He  suffers from a number of chronic respiratory illnesses. Contracted, he believes while working on the cleanup at the World Trade Center in the months following the attacks. He is just one of the hundreds of the First Responders who have developed debilitating and in some cases fatal respiratory diseases shortly after the cleanup was finished.   “ I was a horse back then, I never even  had a cold. About a year or so after I finished working at “The Pile” I started developing breathing difficulties. At first the doctors believed it was just allergies, hay fever. Imagine that?”

“The Pile” was the name given to the massive mountain of steel, iron, concrete and other debris left behind after the towers collapsed by the men and women who worked the ten story disaster area.   “ I’m not the only one who feels as if the Federal government ignored us after this so called “mystery illness” started to affect some of the other guys. Not only the feds but the City of New York too, we’re not even allowed to participate in the ceremony each year. That bastard Bloomberg took care of that, I guess he felt the anger and resentment some first responders were feeling would bubble to the surface.”

Asked if it there was that possibility he looked away, took a deep inhale from the ever present oxygen mask. “ Listen there are a lot of us that are really pissed and upset at the way things have been handled, but that’s a separate issue altogether. We would never use that ceremony to disrespect the families of the people killed that day, never.”Along with thousands of others suffering from the so called “mystery illness”  Turco faces the possibility of  losing the supplementary health insurance allocated by the Federal government at the end of this year.

“ After that I don’t know what’s going to happen, you see this place, all these medications, I can’t afford all this stuff. I had to hang it up  6 years before retirement. Being out on half pay isn’t going to cut it. Thank God I’m not eating much these days” he added only half joking.   “Family helps out of course, but I’m not the kind of guy to ask for help. I don’t want my burden laid on anyone else.   A part-time nurse visits three times a week. She makes sure all the medications are ordered, she picks them up from the pharmacy for him and provides an intangible. She’ll sit and read from the  sports section of the New York Daily News, ” I can’t really focus on the small print anymore even with the glasses, my vision is getting worse each day. Getting old, you know?”

Even with the encouraging gentle nudging of his nurse and the full blown challenges from family  members he seldom gets outside these days. Preferring to sit behind the sliding glass patio doors. ” It’s tough getting in and out of this damn wheelchair. I can’t stand up for too long. I can’t even see the good looking girls going by very well anymore, why bother?   Looking around the tiny living room at the framed black and whites, the newer color photo’s, you catch a glimpse of  how this shrunken man in the outdated wheelchair once looked. Smiling in most of them his 6’ 2” frame topped by thick curly red hair portrays a once vibrant athletic New Yorker proud of his Irish heritage and his place in New York Civil Service.

“ I always dreamed of being a New York City Firefighter. My neighborhood in Brooklyn was full of cops and firemen. My dad was on the job for 28 years. I wanted to, you know…follow in the old man’s footsteps.”I wasn’t able to cut the physical in ’77. Blew my knee playing football . I decided on E.M.T. The next best thing we called it.”  His dark blue eye’s twinkle one moment and cloud over just as quickly when he speaks of the past. “ I’m just glad my father isn’t here to  see me in this shape, he passed back in ‘98. I miss him.”

It’s very hard to miss the resignation in his voice, he sounds like a man who has given up the fight. Reminding him of that he bristles at the suggestion. “Hey in my day I’d have taken on two or three guys at a time. I not a quitter. But, I am a realist.”   There are too many other who suffer from this so called “mystery illness” that has affected 9/11 First Responder’s in New York City. The exact numbers vary depending on the source. Turco suffers from C.O.P.D. , pulmonary embolisms make his life a constant series of trips to and from the Emergency Room of the local hospital. He didn’t want his real name used here, none the less this story needs to be told.

A man who never smoked a cigarette in his life responds to the World Trade Center. He volunteered on his own personal time to assist in the cleanup for 63 days after the Towers fell suffers in silence. He, along with all the other first responders is barred from the ceremony site each September 11. Could he attend even if he was invited or capable of doing so ? That’s not the issue here is it?

The question is why? They have been treated like afterthoughts, annoyances looking for a hand out. Turco and the others are real life hero’s, not the phony ones like the politicians who glad hand and offer fake condolence to the families on September 11. It will never be a true honoring until these people are allowed to participate.